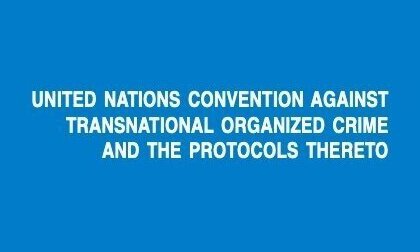 The United Nations Convention against Transnational Organized Crime, adopted by General Assembly resolution 55/25 of 15 November 2000, is the main international instrument in the fight against transnational organized crime. It opened for signature by Member States at a High-level Political Conference convened for that purpose in Palermo, Italy, on 12-15 December 2000 and entered into force on 29 September 2003. The Convention is further supplemented by three Protocols, which target specific areas and manifestations of org anized crime: the Protocol to Prevent, Suppress and Punish Trafficking in Persons, Especially Women and Children; the Protocol against the Smuggling of Migrants by Land, Sea and Air; and the Protocol against the Illicit Manufacturing of and Trafficking in Firearms, their Parts and Components and Ammunition. Countries must become parties to the Convention itself before they can become parties to any of the Protocols.

Youth Consultation Preceding the 11th Session of the Conference of the Parties to the UN Convention Against Transnational Organized Crime (COP11) | Date: Thursday 13th October 2022

The deadline for the registration is September 18 2022.

Call for Applications: 11th Session of the Conference of the Parties (COP) to the UNTOC

The deadline is midnight time Sunday 12 June 2022 at 00:00 CET (Vienna time). We recommend that you apply upon receiving this call, even if your participation is not yet certain, as there will not be the possibility to apply at a later stage. Please note that the application letter should be placed on a letterhead of your organization and signed by the Head of your organization.